Those of us standing on the grounds of Queen’s Park on November 6th (N6) were there to ask for Climate Justice now Real Action @ COP26 as climate negotiations by political leaders in Glasgow went on with deferred promises, delay strategies and false solutions that continued to miss the mark on climate justice. 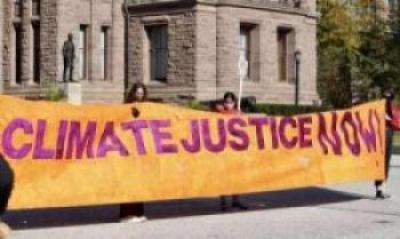 Just before COP26, wealthier countries who had promised to mobilize $100 billion a year by 2020 to poorer countries moved the timeline to 2023. All the while, climate and COVID impacts disproportionately increase and unfair debt mounts in the Global South. At COP26, plans were made for offsets and uncertain escape hatches in order to reach “net-zero” that threaten to circumvent direct emissions reductions and continue to jeopardize Indigenous rights. 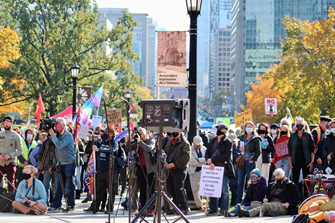 Canada, currently the #4 biggest oil producer in the world and the #1 worst in the G20 for funding fossil fuel projects abroad, signed on to stop funding oil and gas projects in other countries by 2022 but refused to join the Beyond Oil and Gas Alliance, signalling its intention to keep producing more oil and gas domestically than can be produced if the world is to keep temperature rise below 1.5°C.

The potential for better choices that will uphold climate justice and open up the possibility of a better world is why we stood on the grounds and asked for “now” to be the time. This imperative for climate justice is why we will continue to come together! The leadership of smaller countries who produce less oil, like Costa Rica, Denmark, and France (and within Canada, Quebec), in putting forward the Beyond Oil and Gas Alliance, is a start toward bringing others on board. In fact, any gains made at COP26 that move us closer to climate justice are largely attributable to those working, mobilizing and resisting across the globe. Many who face disproportionate impacts, power imbalances and violence are leading, including Indigenous peoples. This courage often comes with great risk -- appalling statistics show that on average 4 land defenders have been killed every week since the Paris Accord was signed. 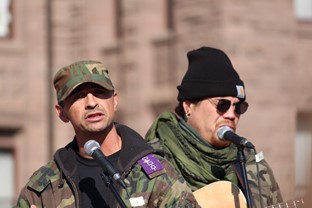 In the words of Skylar Williams, Six Nations land defender and spokesperson for 1492 Landback Lane, “when I see [a] thousand people standing out here, you know what? We know 100% that these fights can be won. I’ve seen a lot of friends here that I’ve seen standing shoulder to shoulder with me at Land Back Lane. I’m asking you guys once again to not let another travesty happen. Another destruction of our territories happen….when those bulldozers rolled through Land Back Lane and flattened out every possible thing that Mother Earth gave to these lands, every tree, every shrub, every blade of grass. Everything that made it beautiful. You know what, that’s what destruction looks like.” (Photo: Skylar Williams and Logan Staats)

Standing on the grounds of Queen’s Park, a thousand people around me, listening to the speeches and songs, watching the dancing and gestures of support, I also felt that potential collective power fuelled by solidarity, love and partnership.

I felt these qualities in the simplest gestures, like placing chairs out along the path for those who needed them and  helping people find each other in the crowd. I felt them in the dynamic pairing of co-emcees Crystal Sinclair, a Cree woman from the Fisher River Cree First Nation in Manitoba, and founding member of Idle No More Toronto and Nigel Barriffe, a teacher and member of Elementary Teachers Federation of Ontario and president of the Urban Alliance on Race Relations. I felt them as Skylar Williams and Logan Staats, Six Nations Singer/Songwriter, stood on the podium together, and as they left directly afterwards, to go to the frontlines in BC to stand with the Wet’suwet’en land and water defenders there.

As Logan’s melody and words, “six miles each side of the river,” lingered, he also spoke about working together and the collective impact of using all of our gifts - music, poetry, dance. Now is the time, he said, to take those gifts and aim them all at the frontlines.

Skylar finished by issuing a call-out, saying, “So now, with this opportunity to be able to go out and stand shoulder to shoulder with our brothers and sisters on the West Coast. You know what? We’re jumping at the chance, because you know what? They need our help. They need your help. And so, if you can’t get boots on the ground out on the Yintah in Wet’suwet’en, then you know you need to be on these streets. You need to be on those railroads. You need to be on every bit of colonial infrastructure that we can use to make sure that their voices are amplified.”

The N6 event, as does the demand for climate justice itself, called for us to stand together on the grounds for an hour and a half but it also called for much more! In fact, the rally started with the planning as a coalition of environmental, labour and social justice organizations got together and pooled their gifts - from doing outreach, to arranging video ads, to creating graphics, postcards and websites, ordering sound equipment and making sure we had COVID supplies - it was a collective effort of solidarity and love. 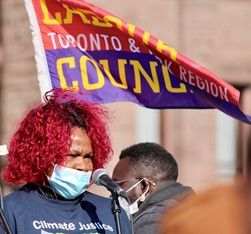 The number of labour groups represented on the grounds was also inspiring and powerful. As Andria Babbington, the first Black woman president of the Toronto and York Region Labour Council said, “the labour movement identified climate justice as a key crisis some years ago….When we start seriously moving away from the fossil fuel industries, we must support the fossil fuel workers and their communities.” (Photo, Andria Babbington, Nigel Barriffe in background)

She reminded us that “Ontario was one of the first jurisdictions in the world to close its coal plants but no provision was made for affected workers and their communities. It was only because there was a strong collective agreement that workers were not left [behind] and nothing was done for communities that lost good jobs and their tax base….” and that “[Doug Ford’s] very first act as premier was to cancel one of the strongest climate change programs in North America.”

While we have our work cut out for us, both federally and provincially, there on the grounds together we felt strong,  we  felt focused. Music touched the heart and vibrated through on a visceral level and as we sang along, “we need to build a better future and we need to start right now,” we felt a collective energy and support that we can tap into going forward. 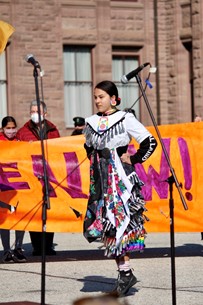 See the website, http://nov6toronto.org/ for more photos and videos of the the performers and speakers.

Youth and age also came together for this event, both in the planning and on the day of action. As Taylor, a 16 year-old activist with Fridays for Future Toronto said in an interview she did for CP24 at the event, “Right now we’re here at this rally to demand that our leaders….in Scotland at COP26 are doing their jobs and not just making empty promises. It’s about coming together….and I think that it’s really inspiring that its youth and other teenagers….But I [think] what’s more inspiring is seeing a lot of older people and seniors here that shows us that we’re not alone….we are all together in solidarity.” (Photo at right: Jingle Dancer)

In her speech, Alice Zhu, environmental science PhD student at U of T and member of People's Climate Movement reminded us that “this year’s COP must be a turning point. We must leave oil in the ground….This year devastating wildfires and heat waves ravaged the country from coast to coast to coast….” She commented that “[w]hile individuals can do what we can in our given social and economic realities, it is not enough. We need our government to step up and take action now….There is no time to waste.” She underlined the rally’s demands - respect Indigenous sovereignty, phase out fossil fuels, a just transition for communities and workers and global justice (full demands at nov6toronto.org) and mentioned that one way the federal government could step up its commitment was to sign the Fossil Fuel Non-Proliferation Treaty. 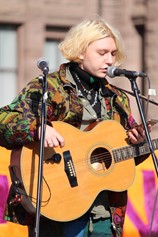 A young climate activist, Zoe Keary-Matzner, reminded us that for youth, climate justice is an ever present concern, saying “for as long as I can remember I’ve been worried about the climate crisis. When I was little I had a wish before blowing out my candles on my birthday cake and I would wish that the climate crisis would be solved. Now that I’m older I know that a birthday wish is not going to solve this crisis. It is going to require people working together and it is going to require governments to listen to the people.” (Photo at left: Sigfried Niklavs Hemming)

“But our government leaders aren’t listening to us. They say nice words like sustainability or reconciliation or net-zero by 2050 but do they mean them? Old growth forests continue to be cut down and industries continue to pollute the air, the lakes and  the forests. And they say sustainability but too many people still don’t have access to food and housing and too many First Nations don’t have access to clean drinking water while billionaires grow richer and richer every day. This is not  sustainable! And they say reconciliation but Indigenous leaders continue to be arrested and jailed by the RCMP for defending their ancestral lands and waters against the construction of pipelines. This is not reconciliation!  Canada’s emissions continue to rise….Net-zero by 2050 is a delay tactic. Net-zero by 2050 is too late. The crucial decade for action is this decade and the goal we must focus on is not net-zero by 2050 but the Paris goal of limiting warming to 1.5 degrees celsius.”

As we stood together on the grounds, we listened to Zoe finish by encouraging us, “when we shout it echoes. When we scream, it echoes. And when we sing, it echoes.” We lingered, holding on to the hope we felt in the power of our collective voice, in solidarity, love and partnership.

Some ideas to move forward with:

“Social convention, which has for so long worked against us, can if flipped become our greatest source of power, normalising what now seems radical and weird. If we can simultaneously trigger a cascading regime shift in both technology and politics, we might stand a chance. It sounds like a wild hope. But we have no choice. Our survival depends on raising the scale of civil disobedience until we build the greatest mass movement in history, mobilising the 25% who can flip the system. We do not consent to the destruction of life on Earth.” - After the failure of Cop26, there’s only one last hope for our survival,