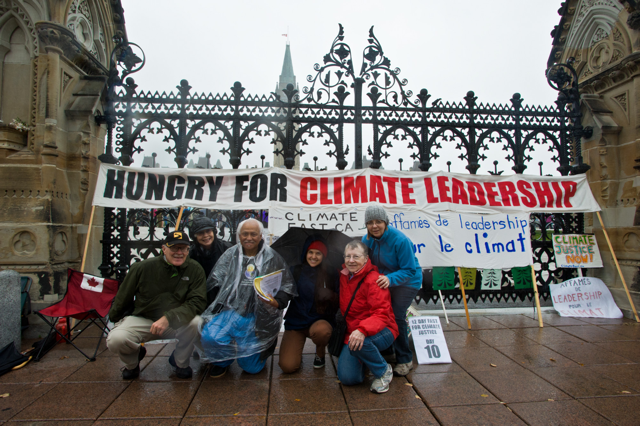 ClimateFast evolved from the Hungry for Climate Leadership fast and vigil, held for twelve days on Parliament Hill, from September 21 - October 2, 2012. The purpose was to demand that the Canadian government address climate change, the greatest threat to our children. More than 100 MPs pledged support, and it was endorsed by organizations such as Sierra Club, Lead Now, Ottawa Raging Grannies, Physicians for Global Survival, Council of Canadians and Canadian Voice of Women for Peace.

In 2015 the name was reinterpreted to refer to the climate emergency: we need action FAST!

The 2019 Global Climate Strike, held between September 20th and September 27th was a series of international strikes and protests to demand climate action. We helped with the September 27th climate strike coalition rally/march and with three events during the Week of the Future. The protests took place across 4,500 locations in 150 countries and was part of the school strike for climate movement, inspired by Swedish climate activist Greta Thunberg. 350.org, a group that organised many of the protests,claim that 7.6 million people participated. 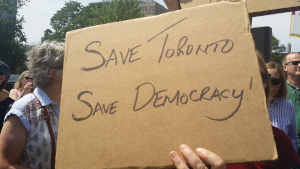 ClimateFast members attended rallies, wrote letters to the editor, and sat in the gallery as Bill 5, the Better Local Government Act, which reduced the City’s wards from 47 to 25 in the middle of the 2018 municipal election, was being debated.  We worked with our supporters to let the government know that 47 was better, that consultation was needed before any changes and changes should not be made mid-election. While Bill 5 did pass in the legislature and received royal assent, it was challenged in the courts.  The Superior Court ruled in favour of a 47 wards but, the government threatened  to invoke the notwithstanding clause from Section 33 of the Canadian Charter of Rights and Freedom.  This threat caused an public uproar.  Ultimately, the Ontario Court of Appeal stayed the Superior Court decision and paved the way for a 25 ward election to take place in October. Climatefast is saddened by this outcome but continues to encourage all its supporters to get involved in civic affairs and make their voices heard.

We had a fantastic turnout at each of the three screenings of the film Revolution that were held in North York, Etobicoke and Scarborough. We met great people and signed up new volunteers.

In April 2017, 200 people attended a presentation Climatefast organized at City Hall with Dianne Saxe, Environmental Commissioner of Ontario, and Jim Baxter, Direction of Environment and Energy Division City of Toronto, speaking on the TransformTO 2050 climate action plan that was going to be released at the end of April. Also in attendance was Councillor Mary-Margaret, chair of Parks and Environment Commmittee and councilor Sarah Doucette. At the end of the presentation, a Q & A followed by workshops on deputation and letter writing were held.

Valentine's Tea for the Mayor

On the eve of the council vote in 2017 to fund TransformTO, students of Thorncliffe Park Public School brought Valentines expressing their love for nature, for the city, and their concerns about climate change to City Hall for the Mayor and their City Councillor, Jon Burnside. The students were brought by one of their teacher James Snetsinger and accompanied by several parents. The students have returned on other occasions to deputize and their words were warmly received with councilors offered them high 5’s all around. Climatefast organized a grassroots campaign asking for full funding and delivered a petition with over 1500 signatures. A letter to all the councilors referenced Mayor Tory’s own Paris statement committing him to climate action. Sadly, Mayor Tory voted against the motion to extend full funding for TransformTO. Council adopted a budget funding only three of the programs for a total of $330,000, or 20% of the funds. The vote fell short by 2 votes in a 23-21 decision. However there is no question many more councilors voted to support the full budget as a result of the lobbying by citizens and the issue was highlighted at city hall.

Acting on Climate Change: A Path for Canada

Climatefast joined with other environmental and social justice groups in sending a joint letter to the Prime Minister and provincial Premiers to embrace the policy changes needed for Canada to meet its Paris commitments. This was part of sustained advocacy through letter writing and MP visits that resulted in climate action being included in the platform that the Liberals put forward in 2015. They included our three asks: end fossil fuel subsidies, put a price on carbon, and develop a renewable energy plan for Canada. While little progress has been made on fossil fuel subsidies the government has brought in a minimum carbon price of $10 per tonne in 2018 rising to $50 per tonne in 2022. Clean Tech is an area receiving funding support by the current federal government. 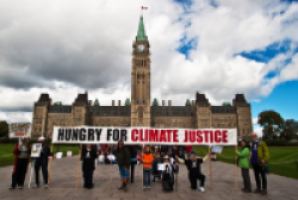