According to the 2018 Environment Commissioner’s Report, Ontario subsidizes the fossil fuel industry with about $625 million a year and spends $11 billion importing fossil fuels. If we shift current fossil fuel subsidies to renewables we could supply 178,000 home energy audits and retrofits or 30,000 solar energy powered homes. According to the Clean Air Alliance, water power from Quebec is now available for as little as 2.2₵ a kilowatt.

ClimateFast has been very active at the provincial level. We have written letters and signed petitions to the Premier of Ontario and MPPs urging action on issues such as:

ClimateFast co-created the People's Climate Action Plan with Drawdown Toronto. On January 28, 2019, ClimateFast held a press conference at Queen's Park with Colleen Lynch speaking on the Peoples Climate Plan, Zoe Keary-Matzer speaking on FridaysforFuture, and Dr. Tomislav Svoboda speaking as a member of the Canadian Association of Physicians for the Environment (CAPE).  The 15 minute video can be accessed here. 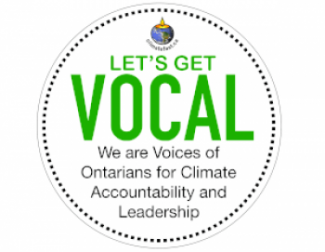 In the summer of 2018 ClimateFast initiated the VOCAL campaign - Voices of Ontarians for Climate Accountability and Leadership to push the provincial government to be carbon accountable. With the introduction of Bill 4 to cancel Cap and Trade without public consultation and the province planning to sue the Federal government over carbon pricing, ClimateFast needed to encourage action!  The first action of our campaign was to urge deputations  oppose Bill 4 - The Cancellation of Cap and Trade Act. The selling of emission credits from Cap and Trade raised $2.4 billion. Money raised was used fund energy efficiency upgrades of hospitals, schools, and homes, renewable energy projects, public transit upgrades and improvements and TransformTO, the City of Toronto Climate Action Strategy.  We organized letter writing and demos held at Queen’s Park in August and October.

Our next action was to encourage submissions to the government for its ‘made in Ontario’ climate plan consultations due Nov 16th.  We held a forum Nov 14th and many groups and individuals made submissions.

Now we are urging everyone to join a campaign for a real peoples climate plan for Ontario!  Let’s get VOCAL for climate action!