Fish stocks are threatened by climate change. Up to 40% of the potential seafood catch is predicted to disappear from tropical regions by 2050. The migration of fish is crucial for the proper conditions for spawning in order to prevent species extinction. The migration of fish allows fast-moving species to settle in areas that are otherwise inaccessible to slow-moving species that swim rapidly. They also exploit fluctuating resources. Migratory fish impact lake, river, coastal, and open ocean ecosystems by competing with other species, preying upon them, and acting as predators and prey to other species. The majority of fish are moving poleward or into deeper waters (1). A warming climate allows some species to expand their ranges. Other times, it narrows their ranges by reducing the amount of ocean they can tolerate thermally. The result is changes in the abundance, distribution, and catch potential of fish.

To safeguard the survival of these species, and to preserve the form and function of our river systems, it is important that we raise awareness about migratory fish, free-flowing rivers, and the threats they face.

Humans have used and modified rivers throughout history to enrich their lives. We need to realize that rivers provide many services (water supply, irrigation, navigation, hydropower, fishing, etc), but we are also responsible for their degradation. We have a responsibility to restore free-flowing rivers and fish migration and prevent future degradation of the environment and species loss. 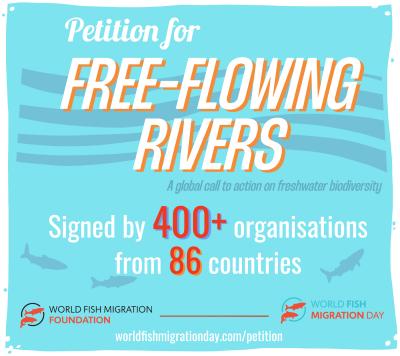 402 organizations from 86 countires signed a petition calling for urgent action to save migratory freshwater fish to protect biodiversity, food sources, and livelihoods, to be presented at the 2022 COP15 convention on biological diversity. The World Fish Migration Foundation has written an Open Letter calling on world leaders to take swift political action to create and implement an emergency recovery plan to restore and protect our freshwater fish populations. This must be done by removing obsolete barriers and protecting all remaining free-flowing rivers.

One of the many ways that World Fish Migration Day is being celebrated this year is through the first ever Fish Flag Contest!