In September, several impactful events converged, both here in Canada and around the world. From disastrous floods In Pakistan to pipelines that threatened pristine rivers on the west coast, from widespread famine in Africa to increased energy insecurity in Europe, they underscored the threats of climate catastrophe, war, human rights violations and colonialism.

So, on September 23 (S23), a few thousand of us gathered in Toronto for the Global Climate Strike #PeopleNotProfit, to recognize the need for climate justice, to decry injustice and to galvanize change.

As the program unfolded, the speakers revealed powerful motivations for coming together to catalyze action. By way of honouring that, this recap is largely a re-telling that highlights the words of those who held the microphone.

The day started bright and early for Fridays for Future organizers Megan and Allie, when Metro Morning and Radio Canada interviewed them. Later, they occupied centre stage as MCs, continuing to articulate the reasons for the event.

We are here because the biggest polluters are now profiting from inflation while most Canadians can’t fill their tank anymore. We’re here because there is an affordability crisis, a climate crisis, a housing crisis, a racial inequality crisis and we’re here to say there are solutions to all of those and we’re demanding today that all those who have power put in place real climate action, equitable climate action, respect Indigenous sovereignty over their territories. We’re here to say that we want climate justice.”

Catherine led us in a program opening, using fire to represent the life and spirit within every living thing and sage to represent caring and sharing. She mentioned that in her youth, members of her Indigenous community encountered barriers to getting grants. When they visited MPs and cam recorded answers to questions about why they weren’t getting grants, they got them!

She encouraged attendees at the rally to visit their elected representatives, bringing things to their attention and stated, “it is said that the youth are our future and I can tell you from here, this vantage point, the youth and the future look pretty good!”

Speaking of spirit and drive, Allie and Megan returned to the stage to take us through the S23 demands for “all the people who have decision making powers in companies, institutions, [and] organizations.”

The S23 Demands include:
•    Reduce Canada’s greenhouse gas emissions by 60% by 2030 compared to 2005 levels
•    Respect Indigenous sovereignty
•    Divest from fossil fuels and invest in abundant, affordable and clean renewable energy
•    Guarantee a just transition away from fossil fuels to a clean economy for workers and communities
•    Put equity at the forefront of climate action, because they go hand in hand
•    Invest in healthcare and public services to prepare for the unavoidable, since the climate crisis is also a public health crisis

On a global scale, prolonged drought in Africa is a severe health crisis related to climate injustice. Millions are experiencing extreme malnutrition and the drought is growing worse. Yet, Africa has been among the very least responsible for the climate crisis.

At the same time, Kenyan President William Ruto recently voiced the intention to leap frog over fossil fuels in the journey toward a green economy. He stated that at the Conference Of Parties 27 (COP27) in November, countries like Canada need to implement economic justice that will help achieve a global just transition.

Yet, our government moves forward with new fossil fuel infrastructure and fails to pay its fair share. 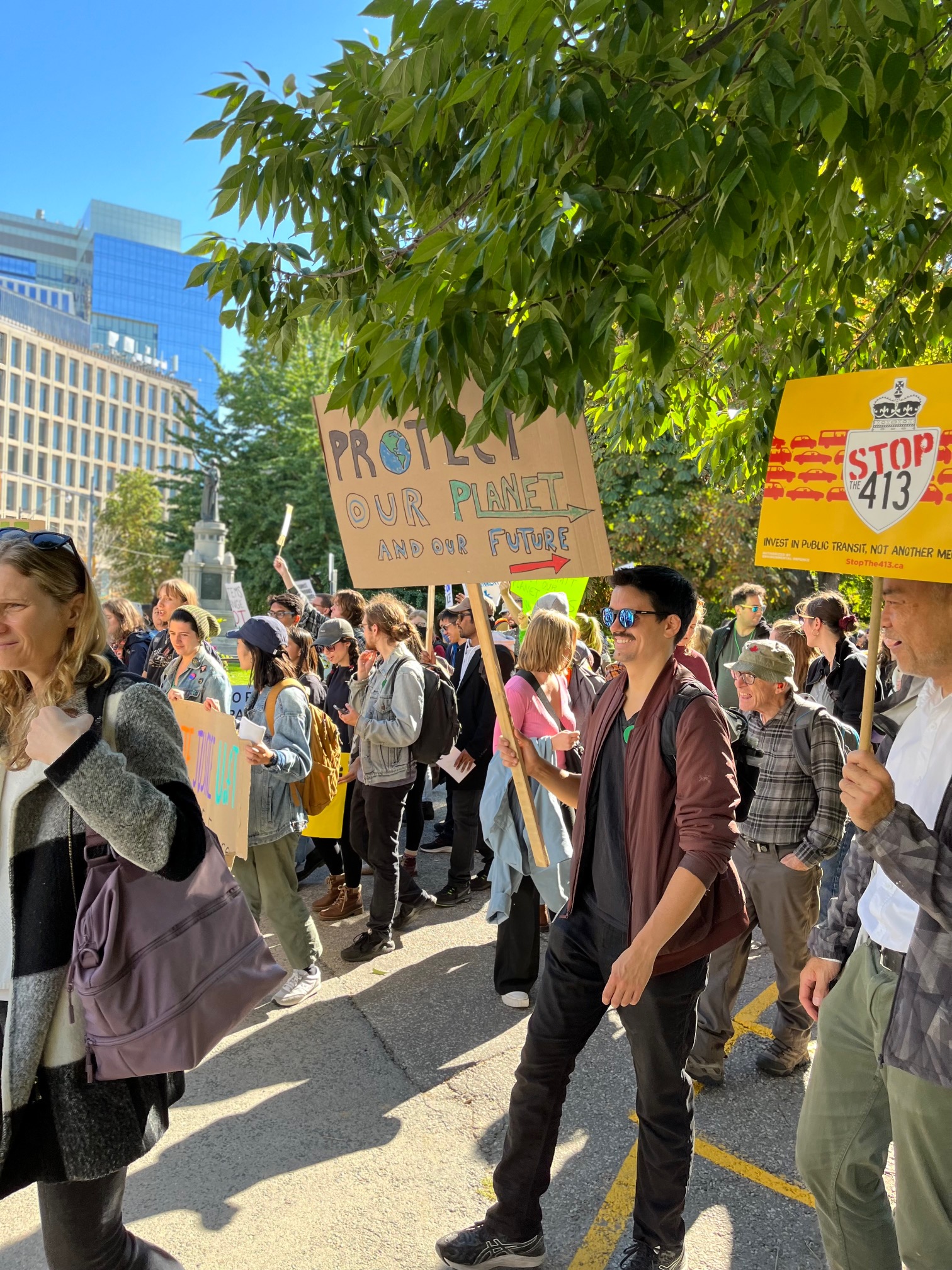 At the S23 rally, Layla Staats touched on this failure, speaking about a human and Indigenous rights violation that continues to unfold within Canada, in Wet’suwet’en territory, where RCMP pave the way for Coastal Gaslink to build out massive fossil fuel infrastructure.

She challenged attendees, saying:  “every event now begins with a land acknowledgment. I challenge each and every one of you. You’re all part of organizations, unions, companies, businesses, you’re all part of something. Take personal responsibility to stop just acknowledging the land, we need land action….

What does land back mean? Well, the literal sense of giving the land back. But also, for each and every single one of us, we need to embody land back, we need to take the land back for us and the relationship to the land. My ancestors saw the land as our relative, the trees all around here are my brothers and sisters, the water is my relative, the birds, the bees, the fruits, we are all related.

Here she held the microphone up to catch the response, “stand up, fight back.”

She went on to recount her recent experiences in Wet’suwet’en territory: “as we stood on that bridge defending that river, hundreds of RCMP approached us in formation, wavering a stick in the front, chanting “huh,” altogether and I knew in that moment that they were there to dominate. There was no peace talks, there was no consultation, there was no discussing it with the elders or the matriarchs that were standing with us. They were there for one reason - to dominate, violently….”

“….I’ll never forget one of the experiences I had as I was arrested and put in back of the car, handcuffed, and looking up at the RCMP officer, he smiled and winked at me. It was just a moment where I realized that I felt this oppression, I felt the dominance, I felt like I had no power and even now as I fight these charges, it’s hard to have faith in our systems. It’s hard to have faith that it mattered, that act of resistance, that act of resilience, that act of saying no, no pipelines, no….

In a beautiful moment, she and her children sang for the crowd: “stop the pipeline/stop the oil tankers/we don’t want them here/cause they pollute/cause they kill/all the life on the earth/save the skies for eagles/save the forest for bears/save the water for salmon/let us all live in peace.”

Allie underscored that the two fights, for a safer future for youth today and for Indigenous control over their territories, have to be tied together. 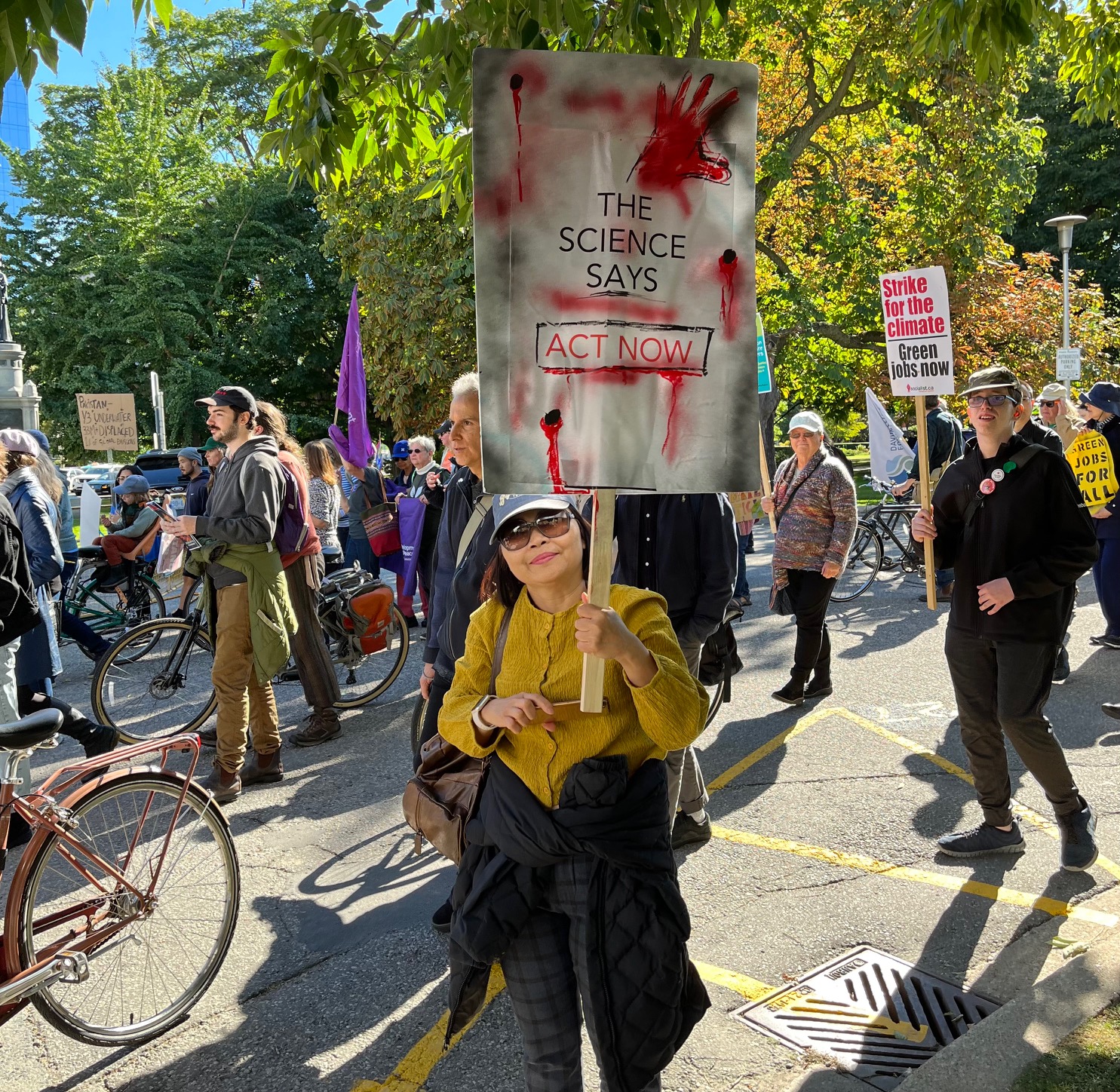 As Jinkie David highlighted, the fight for a just transition for workers and communities is also intrinsic to climate justice. She stated that “Climate disaster is rapidly increasing and it is hurting working peoples. Unions have taken a simple stance, there are no jobs on a dead planet.”

In her viewpoint, “unions have a vital role to protect jobs in the current industry but we also have a role in fighting to create new jobs….as we green and we will green every industry, there will be more jobs in construction, manufacturing and in public service.”

She asserted that “there are some that argue that it is either the economy and jobs or the environment and I want to be clear, that is simply not true. We can do both and we can have both….That is what a just, green transition is all about, that is what a recovery is all about….we must have a job rich transition…that is fair, democratic and worker focused….this ensures that no one is left behind.”

Allie agreed, saying “we need to raise the wages, not the sea levels; we need to cut the carbon, not the jobs.”

Seniors weighed in at the rally too. Megan read out their supportive words which mentioned that the preceding generations witnessed deterioration in terms of pollution, the response of nature as storms grew in severity and intensity, as well as the formation of environmental movements, the warnings of scientists and the failure of those in power to act.

They wrote that they are “very concerned and indeed very frightened about the future of life on the planet. Your generation is not alone. The generation of your grandparents and great grandparents are also organizing. Our numbers are growing and we will support you and we will join you to change the world.”

Mark performed for the crowd, a song about trying our best, stating that there are “millions of people around the world and in Canada who have the same idea that we have, but they’re not here, you are.”

Allie reminded the crowds that we were striking in solidarity with those feeling the effects of the climate crisis right now and that in Pakistan, record floods displaced 33 million people. Pakistan is far less responsible than Canada for causing the climate crisis; yet is bearing the brunt of it right now.

Ashan - What Things you Crave - All Nature is Your Fellow Creature

Ashan, who is originally from Pakistan, sang an ecological song in Urdu.

Music at about 57:03 in video clip above

Another event taking place on the world’s stage right now, related to fossil fuels and the need to move away from them, is the war in Ukraine. Europe, responding to the pressures of war on energy security, put some coal plants on standby; but the European Commission refocused their overall intention for a green transition, with three factors in play - cost effectiveness, sustainability and energy security.

The Ontario government, on the other hand, green-lighted an extreme increase in natural gas use and declined to renew existing hydro power contracts. If this goes unchallenged, emissions will now rise, undoing gains made by phasing out coal, and Toronto will run out of power to electrify its transit by 2025.

Allie expressed outrage at injustices like this for us, saying that “we need to put it toward actions like these [S23],” expressing “our anger at the politicians [who] go to work everyday and decide not to prioritize people over profit.”

Vanessa, the last speaker for the day, started with gratitude, saying “everyone who has been worrying about their climate futures and feeling alone and feeling worried about…all future generations, thank you for showing up for 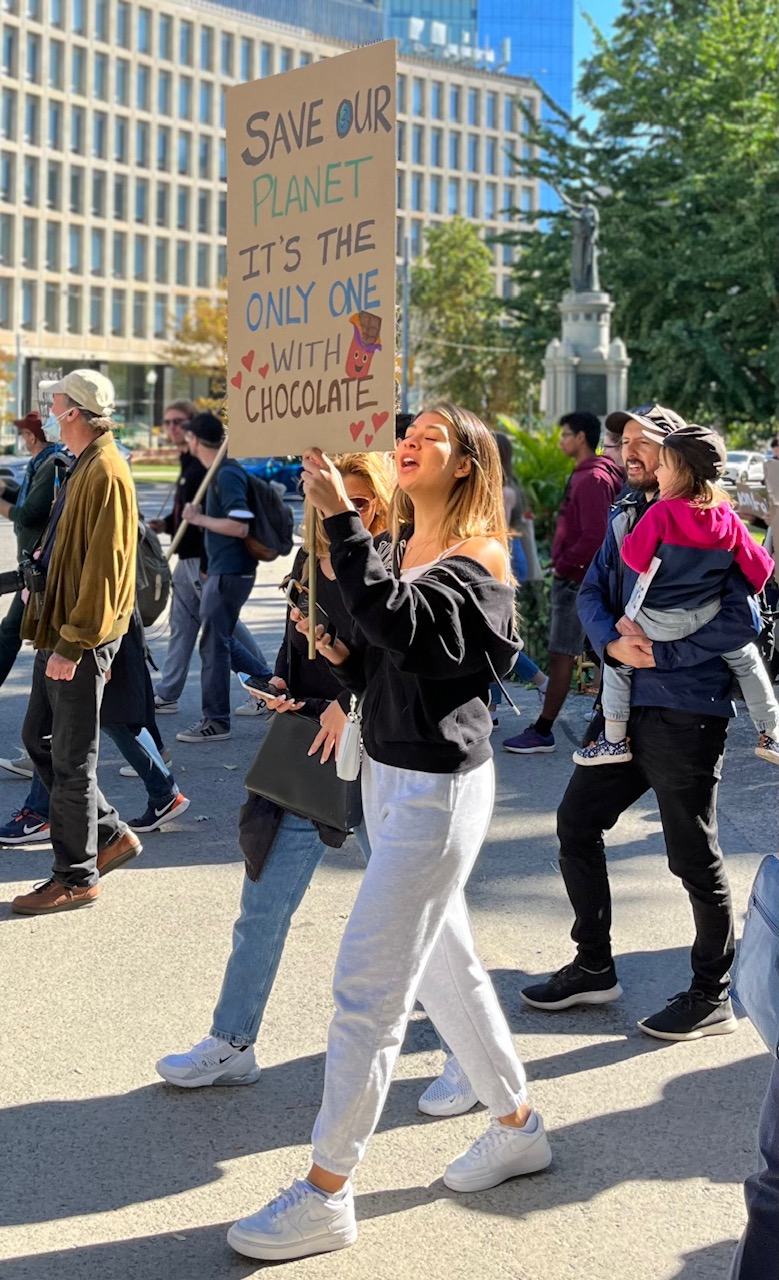 us when we ask you to. Thank you for being here now. Thank you.”

Things she said we could do:
•    call our MPs, tell them to stop the RCMP road stops and arrests of Wet’suwet’en people
•    share and amplify Gidimt’en posts; @Gidimten @UnistotenCamp
•    rise up to the call to #killthedrill
•    https://www.facebook.com/wetsuwetenstrong/
•    yintahaccess.com to stay informed

She expressed that September 30th, on National Truth and Reconciliation day, the RCMP, serving Coastal Gaslink pipeline, will “continue to surveil, harass and brutalize land defenders” in “ongoing colonial violence [that] perpetrates the genocidal role residential schools played when Indigenous people were removed from the land in the interests of resource extraction and the expansion of fossil fuel industry.”

Sharing her experiences, she said, “as an Anishinaabe kwe from a community surrounded by Canada’s petro chemical industries, who has been threatened by the police many times, I can say that nothing, nothing can or will stop us from defending the land and water for our future generations. The time is now. This is your moment, this is our moment. I’m here with you and I feel that you’re here with me. We won’t stop.”

And we can’t stop. In November, the upcoming Conference Of Parties 27 (COP27) in Egypt is an important forum for wealthy, high-emitting countries to make good on their promises and pay for the disproportionate loss and damages poorer countries face.

Adding another layer of injustice though, COP27 is taking place in an oppressive regime with ongoing human rights violations, including the imprisonment and torture of activists like Alaa Abd El Fattah. As host to COP27, Egypt seeks to greenwash themselves in the eyes of the world. Yet, without strong human rights and within this dangerous, corrupt and suppressive context, climate justice is impossible.

As advocates, we are called on to participate in a Global Day for Climate justice on November 12, 2022. Crucial demands include calling for a stop to the repression of civil society movements and the release of the thousands of political prisoners currently detained.