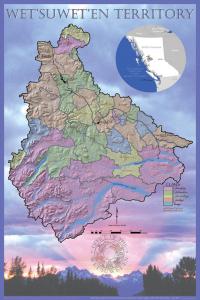 Coastal GasLink, a fracked gas pipeline that has never received the permission of the Wet’suwet’en title holders, is being pushed through without honouring Canada’s commitment to Free, Prior and Informed Consent that is meant to protect, respect and uphold Indigenous sovereignty.

In 2019, during the first invasion by Coastal GasLink, the UN Committee on the Elimination of Racial Discrimination called on Canada to immediately suspend work on the pipeline until such consent had been obtained from the Wet’suwet’en.  The committee urged Canada to immediately cease the forced eviction of Wet’suwet’en peoples and yet, deploringly, it has happened again!  Not only that, the federal government sent in its armed agents in the form of the RCMP to force compliance with an injunction. This is unconscionable and renders the Canadian state open to charges of acting as a de facto police state.

ClimateFast is firmly committed to the United Nation’s Declaration of the Rights of Indigenous People. Additionally, we believe that the Indigenous land and water defenders are essential guides on the pathway to a just, liveable future for all. The irony of deploying the RCMP to defend the illegal actions of the fossil fuel industry for corporate and governmental financial gain while fossil-fuel induced climate disasters are occurring is not lost on the Canadian public.

We demand that the BC and federal governments act on the requests of the Wet’suwet’en, and the demands of so many others calling for justice, and to immediately:

Given the urgent need to find a just resolution to this tainted chapter in Canadian history, we expect and demand the government’s swift action to restore justice and provide compensation to the Wet’suwet’en in this shameful episode that, to many, has rendered the term, “Reconciliation,” a parody of its definition.

To donate in solidarity with the Wet’suwet’en go to: https://www.yintahaccess.com.