Nearly 200 participants joined in the Toronto launch of the campaign for a Fossil Fuel Non-Proliferation Treaty on June 14, 2021.

Tzeporah Berman and Seble Samuel provided background on the treaty process; how the campaign was designed, and what the benefits of endorsing this treaty will be.

It is clear that reducing emissions will require that we reduce not only the consumption of fossil fuels but their production.  It is also clear that it is only through an international treaty to which all nations subscribe that we will be able to do this on a global scale.  Since we need rapid reductions every year this decade international cooperation is key.

Sabaa Khan spoke of respecting Indigenous rights as key to our collective future.  Julia Levin named the $18B we spent in 2020 as a barrier to the transition: e will have a much faster reduction in emissions if we have worldwide agreement to stop any new infrastructure from being built, if we redirect fossil fuel subsidies, and if we actively promote the development of alternatives.

Cat Abreu outlined a common strategy for a post-COVID green and just transition. Labour educator Steve Shallhorn brought in the importance of a well-designed transition plan for workers. Dr. Toni Sappong spoke of the many health benefits from cutting emissions in cities and instead building walking and cycling infrastructure. Chloe Tse spoke of the fear spoke of the fear that is experienced by youth looking at a potentially catastrophic future while little or no action is being taken to prevent that outcome

We all enjoyed a song by Moscow Apartment and Brighid Fry’s introduction of the Music Declares Climate initiative.  Musicians can help us move to a healthier future!

Vancouver City Councillor Christine Boyle invited Toronto to join with Vancouver in moving this campaign forward.  “When you are doing the right things as a city, it only makes sense to bring the rest of the world on board.”

Councillor Mike Layton urged us to speak up for the need for a successful vote in Toronto by speaking with our councillors and building support across the city and with the Mayor.

Many thanks to the planning team: Aviva, Lyn, Fatma, Chloe and the tech team: Tim, Mark & Fatma. 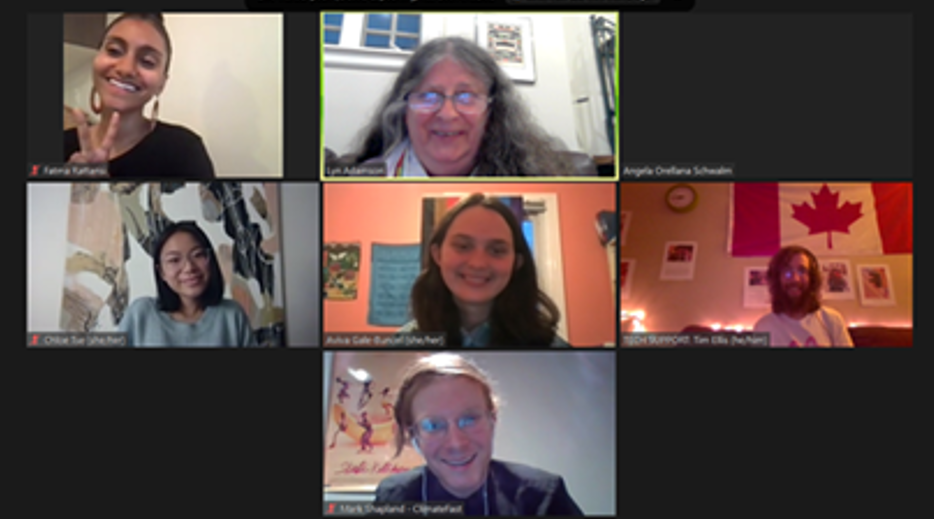 Will you send a letter to your Councillor and the Mayor? please click here for a model letter!

Would you like to help in this campaign?  ! Please fill in this survey

You can view the speakers' bios and photos here.

You can also take action to stop the proliferation of fossil fuels in Ontario right now!