Happy New Year everyone.  I hope that you had as restful, rejuvenating and joyful a holiday season as can be expected during these times.   Many of us at ClimateFast took the past few weeks to spend time recharging and reconnecting.  It was a well earned break.

2021 was a difficult year for many of us, for so many reasons.  We experienced pain, loss, frustration and overwhelm in personal and work lives.  At times, some of us felt like the struggles we face on climate and social issues are too much. We questioned how we can possibly surmount the challenges we are facing and racing towards.  When fatigued everything can seem harder.  Small movements exhausting. 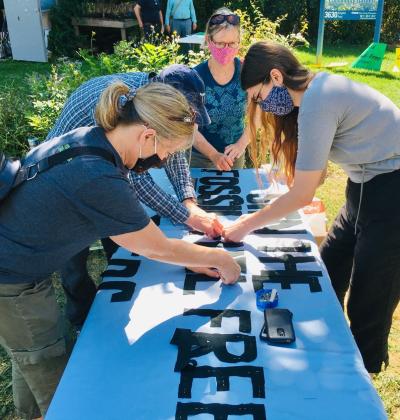 Which is why these times of rest are so important.  They let us sit in the moment and reflect on where we are and what we have done with a clear lens.

So despite the challenges we faced - and boy did we face some challenges! -  the team at ClimateFast is extremely proud of all we have accomplished.  Working at community,  municipal, provincial, federal and global levels our efforts are helping make the changes we need to see.

Over the past 12 months we:

Looking back on all ClimateFast accomplished in 2021 it is clear that we can make a difference when we work together! We can create a healthy, more just society as we fight the climate crisis.  We are so grateful for all the volunteers, environmental, labour and social justice groups that we have collaborated with.   We look forward to our on-going partnerships.

2022 is going to be a critical year for climate action and ClimateFast is up for the challenge.  We are already hard at work putting pressure on the Federal government to create a meaningful and impactful climate mandate; to ensure required resources are given to climate mitigation and adaptation measures (like building retrofits) at all levels; enhancing relationships with mainstream media; and, of course gearing up for the Ontario provincial election in June.

So as we say goodbye to 2021 and acknowledge all that it brought us, I’d like end with a quote.  While over 100 years old, the words are as vital today as they were then.

“It is not the critic who counts; not the man who points out how the strong man stumbles, or where the doer of deeds could have done better.  The credit belongs to the man who is actually in the arena, whose face is marred by dust and sweat and blood; who strives valiantly; who errs, who comes short again and again, because there is no effort without error and shortcoming; but who does actually strive to do the deeds; who knows great enthusiasms, the great devotions; who spends himself in a worthy cause; who at the best knows in the end the triumph of high achievement, and who at the worst, if he fails, at least fails while daring greatly, so that his place shall never be with those cold and timid souls who neither know victory nor defeat”

If you would like to join us as we work towards climate justice, a greener, healthier, more and more equitable society, please get in touch with us.