Our candidate pledge campaign has been launched in cooperation with Step Up Canada, and we are seeking volunteers to help us challenge the more than 1000 federal candidates across the country to sign the ClimateFast  Pledge for Politicians, committing them to work in Parliament to:

View the names of candidates who have signed the Pledge: http://climatefast.ca/candidates-pledged

View the photos of some candidates who have signed:  www.climatefast.ca

We want to challenge all the candidates to sign this Pledge: can you help?

Please email us at: climatefast@climatefast.ca if you can help. 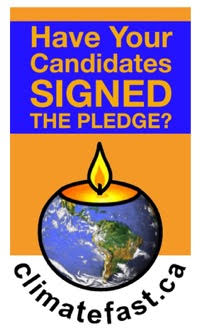 As of this coming election, we now have 338 ridings. In some cases, the boundaries of existing ridings have changed. To confirm which riding you are in now, enter your postal code at Elections Canada Find your electoral district.

We are asking you to seize the day, and engage with each of your candidates for this upcoming federal election. Ask them to sign the Pledge, and thereby demonstrate their political will for real action on climate change.

2/ Otherwise, your candidate may sign the Pledge online through: http://www.climatefast.ca/pledge-support-fast-candidate For further information, please call: (416) 766 6331 or (416) 825 6773.  We thank you for sharing this necessary vision for a just transition to a safe climate future. Where the current MP has NOT signed and the other candidate(s) sign the pledge, we have an opportunity to convince the current MP to sign - or remain uncommitted on the record.

Our job is to make sure no candidate remains uncommitted to climate action! We look forward to receiving your photos OF YOU WITH A CANDIDATE WHO HAS COMMITTED, and to filling our gallery of photos of candidates who have signed from across the country!

The more often the candidates hear the words 'I want to see climate action' at the doorstep and at all candidates meetings, the more likely that candidate, whichever one is elected, will go to Parliament ready to act and to bring  a new sense of urgency to the preparation for the climate summit in Paris in December.

You can be more specific about the climate action you want to see by talking about our three asks, and even by providing your candidates with the fact sheets by KAIROS detailing what meaningful action on each of these measures would involve:

1/ The Canadian Council of Churches has

Climate action is the FIRST issue raised in this resource.

2/ On July 9 ’15, Environmental Defence published an updated comparison of federal parties’ position on climate action and what they would bring to Paris. It’s titled “Will Canada Step Up to be a Climate Leader or Continue as Climate Laggard? http://environmentaldefence.ca/reports/will-canada-step-be-climate-leader-or-continue-climate-laggard

3/ Step Up, Canada has updated their comparison of the different parties’ positions: http://www.stepupcanada.ca/partypositions

TO GET CLIMATE CHANGE DISCUSSED DURING THE ELECTION WE ALSO NEED IT RAISED IN THE DEBATES! by Alice Xia Zhu

Climate change is severe, and it is right here before us. It is an issue that cannot be ignored, and which federal parties need to address. The impacts of climate will affect younger generations the most, and we need to stand up for their futures  by making sure that climate change is a debate topic in the federal election debates leading up to the federal election on October 19 of 2015.

If climate change is included as a topic in at least one of the leaders’ debates, then Canadians will have an opportunity hear their leaders speak about their positions on of climate change and what their party will do about it. This is the perfect chance to help Canadians make the right choice in choosing the party with the most climate-friendly policies, (and to channel the positive energy of the March for Jobs, Justice, and Climate into real change in the upcoming elections. )

To support the campaign to make climate change a federal election debate topic, please visit our Avaaz petition and consider signing on. Our Avaaz petition includes a link to our official request letter to the debate organizers.

Here is a template email to send to your friends and family to spread the word:

there is an important petition going around to make sure climate change is an issue in this year's federal election debates. The debates have traditionally been hosted by a consortium of broadcasters from various networks such as CBC and CTV. This year, there are several debates being hosted by different organizations. We are petitioning all of this year’s federal election debate organizers - the broadcast consortium, TVA, The Globe and Mail/Google Canada, and Maclean's magazine - to make climate change a debate topic in their debates. Our goal for the petition is to reach enough signatories to make the broadcasters aware of Canadians' concern for climate change. We are currently contacting the news stations to enquire the number of signatories needed to make our goal a reality. We hope that at this point in time, you will support this petition by signing on.

Thank you very much,

Sign up to fast with us or to do a local climate event on OCTOBER 1ST - let's make it a day of action during the campaign to focus on CLIMATE!!

And if you are fasting with us today, August 1st, our thanks.

This is now an international campaign that is growing, and will continue growing up to December 1st, in Paris, at the Climate Conference.

1/ Today, July 1, 2015, six of France’s key faith leaders are fasting for the climate. They represent the Buddhist, Protestant, Muslim, Catholic, Jewish and Orthodox faiths across France. As they fast, they are meeting with France’s president, François Hollande, at the Elysée Palace and delivering a declaration to him, calling for the crucial Paris talks this year to be a place that enable real climate justice. Having lost sight of its relationship with nature and its intimate relationship with all that goes to make it up, humanity has lost its way through its lethal domination and exploitation of the environment. We are challenged to rethink the way we live our our relationship with creation and the environment.

2/ The 365 day Rolling Fast for the Climate has, as of the end of July wrapped up 2 months of fasting in Asia, and passed the baton on to Africa, where individuals will be fasting through Augusta and September, prior to passing the baton to Europe. See

https://www.facebook.com/fastfortheclimate     to find out who is fasting day by day.

3/ Fast for the Climate participants will be in Paris at COP 21. Some will have participated in the the People’s Pilgrimage.

4/ Read the August 1st newsletter from Fast for the Climate here.

LET'S WORK TOGETHER FOR CLIMATE ACTION - OUR ACTIONS ARE MAKING A DIFFERENCE!

1/ On July 5, ClimateFast marched in the 10,000 strong rally and march for Jobs, Justice and the Climate. 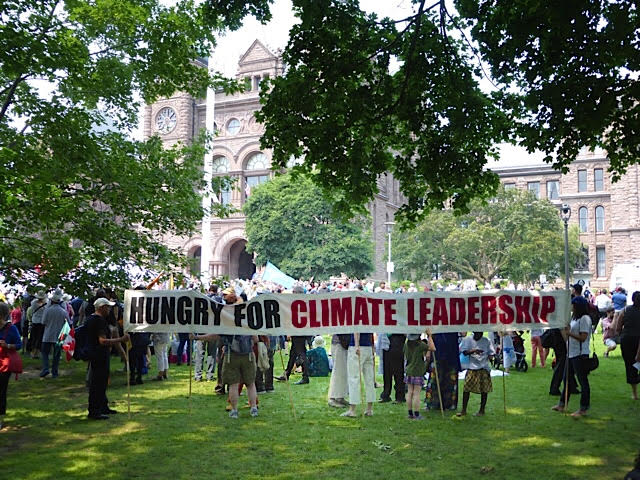 2/ On July 20 in Toronto several groups co-hosted a forum on Climate Action: Lobbying, Elections, and Paris COP21. Below from left to right are: 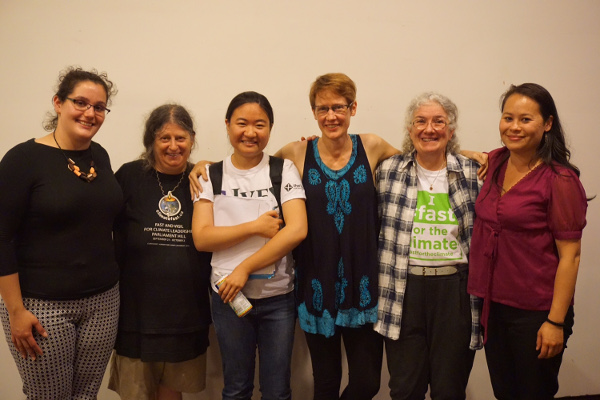